Entirely run by volunteers, the YABBAs encourage children to recommend recent Australian published books, read all the recommendations for their peers, rate them against all others and then finally reward that book they feel is best.

A note from Andy:

A good time was had by all at the ceremony apart from the 50 or so people who were rendered temporarily —and in some cases permanently—deaf by Terry’s popping of a party-popper right into the microphone during our acceptance speech. Sure, I GAVE him the party popper, but I didn’t actually TELL him to do that…

The iconic duo began their creative partnership with Just Tricking! in 1997 and are still creating amazing books to this day. Huge congratulations to them both!

About THE 78-STOREY TREEHOUSE:

Join Andy and Terry in their spectacular new 78-storey treehouse. They’ve added 13 new levels including a drive-thru car wash, a combining machine, a scribbletorium, an ALL-BALL sports stadium, Andyland, Terrytown, a high-security potato chip storage facility and an open-air movie theatre. Well, what are you waiting for? Come on up!

Get your copy of  The 78-Storey Treehouse here. 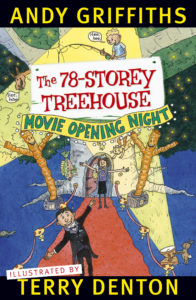