Associate Professor Behrouz Boochani a Kurdish-Iranian writer, journalist, scholar, cultural advocate, filmmaker and author of the multi-award-winning No Friend But the Mountains has arrived in New Zealand on a one-month travel visa. Since 2013, he has spent almost seven years as a political prisoner incarcerated by the Australian government in the Manus Island Regional Processing Centre (Papua New Guinea), and in 2017 was transferred to one of three new prisons (East Lorengau Refugee Transit Centre) to continue his incarceration.

Behrouz was offered the short-term visa to New Zealand to attend a WORD Christchurch literary event to be held on 29 November.

I just arrived in New Zealand. So exciting to get freedom after more than six years. I have been invited by Word Festival in Christchurch and will participate in an event here. Thank you to all the friends who made this happen.

The Guardian has quoted Behrouz as saying;

Behrouz’s autobiography, No Friend But the Mountains, was laboriously tapped out on a mobile phone and translated from the Farsi by Omid Tofighian. It is a voice of witness, an act of survival. A lyric first-hand account. A cry of resistance. A vivid portrait through years of incarceration and exile.

Behrouz’s appearance was a tremendous success, with tickets to the event selling out and the journalist being met with several standing ovations from the crowd. Photos by WORD Christchuch. 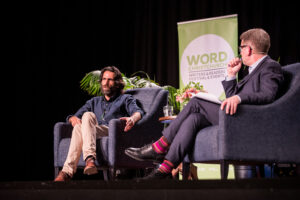 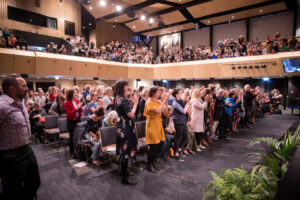