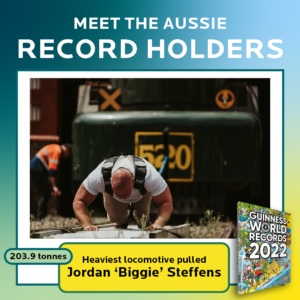 If you thought pulling a car would be hard, how about pulling a steam train, that weighs 204 tonnes?!

Jordan Steffens, better known as ‘Biggie’ for his incredible feats of strength, is our Record Holder of the Month. Showcasing the best of our record holders from down under, this month we asked Biggie some questions about holding not one but TWO records.

Tell us about yourself, how did the nickname ‘Biggie’ come about?

The nickname ‘Biggie’ came to me at a young age. In late primary school, 12-13 years old, I was about 90kg and about 5’10, so I was quite a large kid and it just stuck. To be honest, people know me as ‘Biggie’ more than Jordan. My mum can tell the story about me as a young child, trying to pull the wheels off her car with my hands and teeth . . . and whatever else I could use. Also, this was the car she drove not a toy car (ha ha ha)!  She asked what I was doing, my response was: ‘One day, I am going to be the strongest man in the world.’ So I guess the love of strength started young!

Pulling a steam train that weighs 204 tonnes is an incredible achievement, how did you prepare for such a feat?! 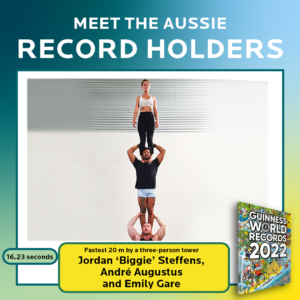 I have been preparing for this moment my whole life I guess, I was very blessed to be scouted by the South Australian Institute of Sport for weightlifting where I’ve represented my country many times. This then led to my life as a strongman. My training leading into this event was to gain as much leg strength and power as possible, but also mental preparation

which was a HUGE factor. To make your brain believe you can pull 204 tonnes of metal with wheels that are taller than a large man takes a lot of time to dial in!

What people don’t see is the behind-the-scenes stuff, like the hours setting up and building equipment. So people like Matt Leslie, who has been my engineer since day one and has supported me through EVERY super event I have done, makes this a reality. Breaking records is a team event and I need to thank people like Oliver Lukins and Peter Michalak from StreamRanger, Sharon Thain from my PR team and the media team Dean Kyritsis and Dan Glasgow. Plus so many more!

Take us through a typical breakfast/lunch/dinner for a big day like this, you must eat a lot of Weet-Bix?!

100%!!! On the day I was 145kg (320lbs), not the biggest strongman on the block but at 6’1, I was pretty big, and I was eating every 2-3 hours. Normal people eat breakfast, lunch and dinner, I eat those meals every 2-3 hours. Breakfast would be 3 cups oats/6 eggs/toast/tomato. I would eat something similar 2-3 hours later, then lunch would be meat and veg with some form of rice or pasta. 2 hours later, the same meal again. Then to finish off my day 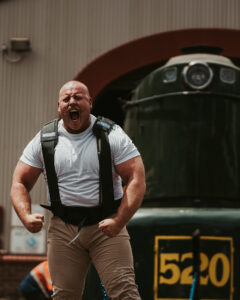 is dinner: chicken or fish veg and pasta and a big protein shake before bed. Don’t forget smashing 10 weeties for fun!

You also hold the record for fastest 20 m by a three-person tower, is this why you’re The King of The Circus?

Ha ha ha no not at all! After I retired from being a professional strongman and moved into life as a Circus Strongman. I was given the name ‘THE KING OF THE CIRCUS’ after LEGENDARY Circus Strongman Louis Cyr who was known as the ‘World’s Strongest Man’.

I was one of the three people involved with this record attempt alongside Andre Augustus and Emily Gare who are a part of ‘Australia’s Top Circus’, Gravity and Other Myths. Emily and Andre are two of the BEST acrobats in the world and it was an honour to have them a part of this because without them this record would have never happened.

Are there any other Guinness World Records that you have your sights on?

Definitely! I have 2 more world records to be completed before the end of 2021. But, I would love to attempt the heaviest plane pull in the coming year and would also like to extend my train pull record by pulling the Union Pacific ‘Big Boy’ in the USA, which is over 500 tons.

I love performing acrobatics with the groups here in Adelaide and working with Gravity and Other Myths, it’s a lot of fun! I would love to break a few more Circus Strongman records with their support. Maybe a person-to-person throw for distance or a bunk-for-height, we will see what comes up but keep your eyes open . . . some BIG surprises to come.

If you could have any superpower, what would it be?

HMMMMM if I could have any superpower . . . the ability to sleep on cue. 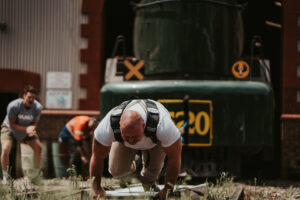 Why did you attempt these records?

I have always loved the look of the extrem

e circus strongman events. Not too many things bigger and heavier than a 1940s steam train! And it’s always fun carrying two people on top of me. I have found that I have a knack for these types of events, but it also was about why we wanted to do these records, not just why we chose these records.

I really wanted to give back to so many people for giving me so much! I have been so blessed as an athlete to travel around the world and represent my country. The support from my sponsors, family, friends, peers, mentors and everyone has been so overwhelming. I wanted to show them that they didn’t back me, and support me, for nothing and these records are for them not for me. These records are for all the people who were locked away due to COVID restrictions, for the people who are scared or lonely, this record is to show them ANYTHING is possible. Just keep fighting for what’s right. This record is for everyone around the world to show that a young lad from South Australia had a dream to become a strongman, but never in his WILDEST dreams did he believe he would achieve what he has in his career and be a part of history with Guinness World Records.

How does it feel to be featured in Guinness World Records 2022?

It means the world to me, all the hard work since I was 13 years old, the struggles, wins, losses, injuries, trophies, surgeries, blood, sweat and tears were all worth it.

Achieving this world record is a DREAM come true . . . but for me, this is just as much my record as it’s my support team’s record. My friends, healthcare team, coaches/training partners, my support team at my events and of course my family. But also, the awesome team at Guinness World Records: Charlie Anderson and her team, and Pan Macmillan for distributing the book here in Australia. Without all these people I wouldn’t be where I am today and I wouldn’t be featured in this book, that’s for sure!

Is there a record holder that inspires you?

They are all inspirational in their own way to me. It doesn’t have to be a strongman or an acrobat, it can be anyone. My inspiration comes from people who excel in their chosen area or who do things I cannot do. I love singers because I can’t sing but I come from a singing family! Inspiration came from my peers who I lifted against, and with almost 20 years of strength sports, they inspire me to be better and push me harder to be the best I can be.

My Mum, who was the most hardworking single mother, wanting to give her two sons everything but would help anyone and everyone else before herself. She works daily as a dental teacher and runs an outreach program for the homeless here in Adelaide, for people who need dental work done but can’t afford it. She also works with a women’s group that supports ladies who have been affected by domestic violence and abuse. My grandparents. What they gave me also made me the person I am today. They were the most giving, wonderful people that would literally give you the clothes off their back to make sure you stayed warm and safe. These are the truly strong people in my family and they are my inspiration.

To see more incredible records just like Biggie’s, make sure to get your copy of Guinness World Records 2022 which is out now.

Stay tuned for the next Record Holder of the Month!