We are thrilled to announce that Maps of Our Spectacular Bodies by Maddie Mortimer and Trust by Hernán Diaz have been longlisted for this year’s Booker Prize.

Considered the most prestigious literary prize, this is an exceptional achievement for both of our authors. Diaz has previously been a finalist for the Pulitzer Prize, and Mortimer recently won the Desmond Elliott Prize 2022 as a debut author, for Maps of Our Spectacular Bodies.

Maps of Our Spectacular Bodies by Maddie Mortimer 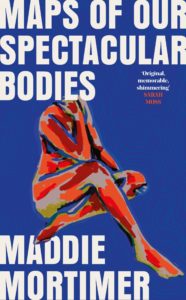 Today I might trace the rungs of her larynx or tap at her trachea like the bones of a xylophone or cook up or undo some great horrors of my own because here is the thing about bodies: they are impossibly easy to prowl, without anyone suspecting a thing.

When Lia finds out that her cancer is back, she tries to keep the landscapes of her past, her present and her body separate. But bodies are porous, unpredictable places.

Lia’s story is told, in part, by the very thing that is killing her; a gleeful and malevolent voice that shape-shifts through her systems, learning her life from the inside-out. We come to understand the people that have shaped her: a daughter, navigating the horrors of the playground; a husband, struggling to maintain a sense of self as everything falls apart; a regretful mother making up for lost time; and a troubled former lover who belongs to Lia’s past, but won’t stay there. In turn they each take up their place in the changing landscape of Lia’s body, at the centre of which dances our restless narrator and a boy nicknamed ‘Red’; the chemotherapy that is Lia’s last hope.

Maps of Our Spectacular Bodies is a story of coming-of-age at the end of a life – a heartbreaking tale of desire, love and forgiveness, a wild and fierce journey through one woman’s body. 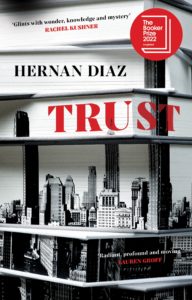 A literary puzzle about money, power, and intimacy, Trust is a novel that challenges the myths shrouding wealth, and the fictions that often pass for history.

Even through the roar and effervescence of the 1920s, everyone in New York has heard of Benjamin and Helen Rask. He is a legendary Wall Street tycoon; she is the daughter of eccentric aristocrats. Together, they have risen to the very top of a world of seemingly endless wealth—all as a decade of excess and speculation draws to an end. But at what cost have they acquired their immense fortune?

This is the mystery at the center of Bonds, a successful 1938 novel that all of New York seems to have read. But there are other versions of this tale of privilege and deceit.

Hernan Diaz’s Trust elegantly puts these competing narratives into conversation with each other—and in tension with the perspective of one woman bent on disentangling fact from fiction. The result is a novel that spans an entire century and becomes more exhilarating with each new revelation.

Provocative and propulsive, Trust engages the reader in a quest for the truth while confronting the deceptions that often live at the heart of relationships, the reality-warping gravitational pull of capital, and the ease with which power can manipulate the truth.