It is with great excitement that Pan Macmillan Australia announces that the long-awaited new novel by Markus Zusak, Bridge of Clay, will be released by Picador on the 9th of October 2018.

“Thirteen years is probably long enough between books, and I quit this one so many times …The thing is, I also knew I could never quite give it up completely. People would say, ‘Just write one of your other ideas,’ but that was the thing – there were no other ideas,” said Markus Zusak.

“Everything was going into this. Now I can finally say I love it, but not in a way of thinking it’s good, or great; it isn’t. It’s itself – and if nothing else, I know it’s big-hearted. It’s a boy in search of a miracle, and that’s how I feel about finishing it. Every book we write means something to us, but sometimes a book means everything – and Bridge of Clay, for me is that latter type: the book you have to fight for, but is all the more rewarding.”

Bridge of Clay. It's done. It's coming… To all of you who’ve given me so much over the years: THANK YOU! (For full announcement video – and hopefully a laugh or two – go to my facebook page.) #bridgeofclay #linkinbio

It was in 2005 that Markus Zusak’s previous and best-known novel The Book Thief was published. Death’s narration of Liesel Meminger’s love affair with books in Nazi Germany is an international bestseller, published in 45 territories. With worldwide sales now over sixteen million copies, including one million copies in Australia and New Zealand, Markus Zusak is one of Australia’s most successful authors both here and internationally.

About Bridge of Clay:

Bridge of Clay is about a boy who is caught in the current – of destroying everything he has, to become all he needs to be. He’s a boy in search of greatness, as a cure for memory and tragedy. He builds a bridge to save his family, but also to save himself. It’s an attempt to transcend humanness, to make a single, glorious moment: A miracle and nothing less. 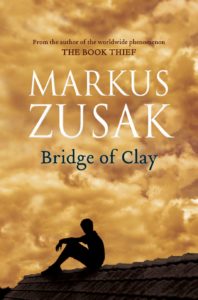