Meet our GWR 2022 Record Holder of the Month, Troy Conley!

It’s December, and with the festive season in full swing, we have a brand new Record Holder of the Month. Meet the Aussie strongman breaking records with ease and for the greater good, Troy Conley. 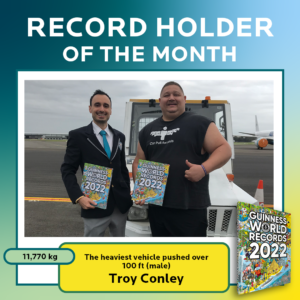 Hometown: Born in Escondido, California but grew up in Sydney, Australia since two years old

Tell us about yourself and what Guinness World Records you currently hold?
I’ve been doing Strongman for over 8 years, with the last fourteen months focused on working with Hyundai Help for Kids to raise money for three amazing children’s charities: Little Wings, Sydney Children’s Hospital Foundation and Ronald McDonald House Charities Australia. So far we’ve raised over $61,000 by performing various forms of Strength and of course a few Guinness World Records as long the way.
Currently, I hold two world records with Heaviest Vehicle Pushed over 100ft and Fastest 20mtr Light Aircraft Pull with Teeth as well as a further 2 currently pending verification- Most Cars Pulled by a man- 16 Cars and Most Cars Pulled with Teeth- 5 Cars.
Can you explain #carpullforkids, what the record was and why you decided to do it? 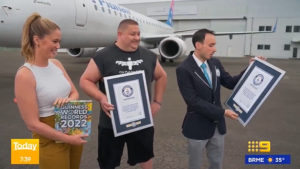 As part of #carpullforkids I set my sights on a few big records and looked for opportunities where we could spread the word to as many people as possible. We had the help of Heavy Vehicle Industry Australia and their Brisbane Truck Show. The attempt was made as part of their Southbank Truck Festival which sees over 40,000 people attend over three days. It’s the biggest Truck Show in the Southern Hemisphere!
I knew this record, in particular, would be really tough and it required me to dig deep, fight and move one inch at a time- similar to a lot of the stories I’ve heard from the kids I’ve been raising money for. These are kids who have cancer, severe injuries or other forms of challenges they’re facing and every day is a fight yet they’re so positive and resilient- it makes what I do pale in comparison. 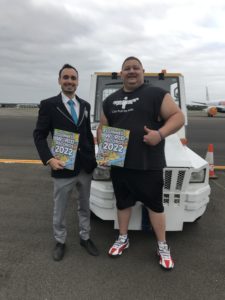 What is a normal day in the life of a strongman, how many weetbix do you have for breakfast?!
It all depends on the day, I train in the morning so four days a week I’ll be up early and go to the gym. Then breakfast is usually milk and eggs, lunch will be some kind of meat and potatoes while dinner is normally steak, potatoes and veg. And days I need extra calories… Ice Cream – every Strongman’s favourite meal! Strongman isn’t my job though, so my days are filled with work – I’m a Sales Rep with Creative Visuals so I’m often out on the road meeting clients. As we specialise in portable event media my Strongman Strength comes in handy as I lug a Portable Showroom around with me. After work it’s usually dinner with my wife and then off to bed – sleep is vital for me and I’m very lucky to have a wife who supports me the way that she does.
Did you always want to be a strongman? Was this something that started from when you were a kid?
Not at all, I actually didn’t even step foot into a gym until I was 30 years old and had never lifted weights in my life. Although Mum did recently find a photo of me at three years old carrying a sheep, so I guess you could say I always loved lifting – I just never realised it.
If you could break any record in the world for Guinness World Records, what would it be?
Hands down: the Heaviest Vehicle Pulled with Teeth, and it’s the next on my list!
Do you have any records planned for the future?! 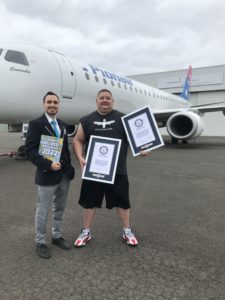 100%! And there’s a few I’d like to get after. I’m only 38 so I am definitely not done yet. I want to keep challenging myself for the greater good and keep raising money for those who need it most. The last twelve months have been the most fulfilling of my life, not so much for the records but more so for the greater good. We’re doing it in my own quirky way.
If you could have any superpower, what would it be?
Definitely has to be Super Strength, ha ha!
What advice would you give for the kids of Australia that want to break a Guinness World Record one day?
Don’t ever let anyone tell you that you can’t do something- absolutely anything is possible. Believe in yourself, surround yourself with people that lift you up and understand it doesn’t have to be perfect or easy – the best achievements are the ones we earn. A lot of people were saying sorry to me last year when I failed the record attempt but that failure led to the best twelve months of my life and setting not one, not two, not three, but now FOUR Guinness World Records with more to come! So shoot for the stars, dare to dream – and dream big.  We can all help change the world for the better in our own unique way . . . What’s yours?

To see more inspiring records like Lewie’s, make sure to get your copy of Guinness World Records 2022 which is out now. Check out It GiRL on Instagram and Facebook!

Stay tuned for the next Record Holder of the Month!