Today marks the 80th anniversary of the landing of Japanese forces at Papua, in what would become one of the most consequential battles in the Pacific Theatre of World War II. One of the soldiers who was there, Reg Chard – just 18 years old when he boarded a ship into the unknown – endured a hell like no other on the infamous Kokoda Trail. Unrelenting rain, slogging through knee-high mud for days on end, up and down mountain after mountain, and a jungle so dense the enemy could be just centimetres away at any point. If they weren’t picked off by the Japanese, many of Reg’s mates succumbed to contract malaria and scrub typhus. But onward they went, knowing that if they could not repel the Japanese invasion, their home would be next. 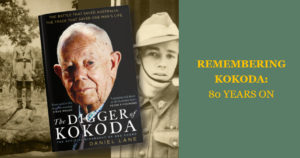 Ironically, Kokoda rescued Reg decades later when he decided to take his own life. After losing Betty, his wife of 66 years, the grief-stricken great-grandfather lost the will to live. But he found new purpose through educating young people, giving guided tours of Sydney’s Kokoda Track Memorial Walkway.

Now, as one of the last surviving soldiers of the “battle that saved Australia”, he has become custodian of its legacy. Commemorating the lives of all those he fought with and those who helped him survive, Reg’s memoir, THE DIGGER OF KOKODA, is a deeply moving, healing and inspiring story of the 98-year-old veteran’s life and service.

Reg says of the book, ‘When I was approached to write my life story, I was reluctant to do so because I didn’t want to seem to be pushing myself as some kind of “hero,” because I’m definitely no hero. I’ve always believed that title belongs to the soldiers and nurses who didn’t return home from the war – they’re Australia’s greatest heroes. What made me decide to write it was knowing there’s now only a handful of veterans left from the terrible Kokoda and Beachhead campaigns. I figured my story could (in its own small way) honour the thousands of men and women who gave their all for Australia.’

Learn more about Reg and THE DIGGER OF KOKODA here.