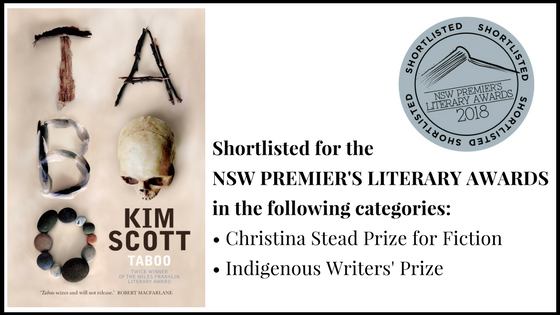 A double congratulations are in order!

The book is in the running to take home:

• The Christina Stead Prize for Fiction
• The Indigenous Writers’ Prize

You can also vote for this book in the People’s Choice Award which is chosen by public vote. Let’s make this a hat-trick for TABOO!

What the judges said:

This breathtaking novel by Kim Scott offers a narrative of redemption set on massacre country in Western Australia. Taboo is a powerfully mystical story where dead creatures spring to life out of campfires and wheat trucks, and where Aboriginal ancestors rustle and murmur as they are awakened by the acts of the living.

You can see the full judges’ comments here.