We are pleased to announce that The 143-Storey Treehouse by Andy Griffiths & Terry Denton and Take Three Girls by Cath Crowley, Simmone Howell and Fiona Wood, have been nominated for the 2022 Young Australians Best Book Awards (YABBA).

Chosen by children across Victoria during Term 1, these titles were nominated as some of their favourite Australian books. Students are then encouraged to read as many of these books across Term 2 and Term 3 that they can!

Read more about the YABBA story here, and check out the other books nominated. 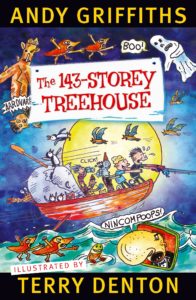 The 143-Storey Treehouse by Andy Griffiths and Terry Denton

Andy and Terry’s treehouse now has 13 new storeys, including a word-o-matic (it knows every word in the whole world!); a recycling depot; a wrecking ball; a complaining room; a spooky graveyard (where it’s always midnight, even in the middle of the day); a toffee-apple orchard guarded by a kind scarecrow; and a camping ground where you can have a nice, relaxing camping holiday – unless you get caught by hobyahs, put in a bag and poked with a stick, that is . . .

Well, what are you waiting for? Come on up! 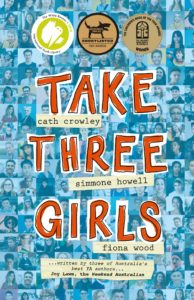 ADY – not the confident A-Lister she appears to be.
KATE – brainy boarder taking risks to pursue the music she loves.
CLEM – disenchanted swim-star losing her heart to the wrong boy.

All are targeted by PSST, a toxic website that deals in gossip and lies. St Hilda’s antidote to the cyber-bullying? The Year 10 Wellness program. Nice try – but sometimes all it takes is three girls.