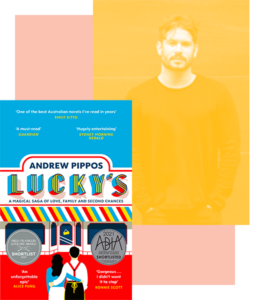 We are delighted to announce that Lucky’s by Andrew Pippos has been shortlisted for the Readings New Australian Fiction Prize 2021. This prize is chosen by staff members from Readings. They selected six of the best new novels or short story collections from debut or second-time Australian authors.

“In a world full of uncertainty, it is reassuring to know that writing in this country is just as outstanding as ever. Which, of course, made it exceptionally hard to choose,” said Readings Doncaster manager and chair of judges, Kate McIntosh, “With lockdown raising its head several times during the judging process, however, it was a great privilege to always have a pile of books waiting to be critiqued, enjoyed and ultimately, judged.”

This adds to the growing list of nominations for Andrew Pippos. Lucky’s has also been shortlisted for the Miles Franklin, the Mud Literary Prize and ABIA Matt Richell New Writer of the Year. The winner will of the Readings New Australian Fiction Prize 2021 be announced in October.

Andrew Pippos spent part of his childhood getting underfoot in his family’s Greek-Australian café. When he grew up, he worked in newspapers and taught in universities. This is his first novel, and it packs in everything he knows about growing up in a noisy, complicated, loving family. He lives in Sydney.