TABOO sweeps up at the NSW Premier’s Literary Awards 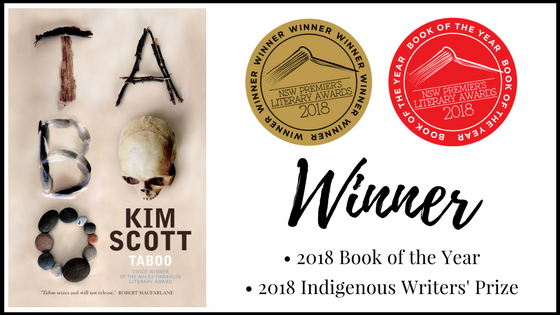 We are so delighted to share that Taboo by Kim Scott has won two 2018 Premier’s Literary Awards.

Kim Scott has not only taken home the 2018 Indigenous Writers’ Prize, but also the prestigious Book of the Year award.

This is an outstanding result and we could not be more excited for Kim!

The judges’ comments (this is just a part of the comments – you can read the rest here):

‘As a portrait of one Aboriginal extended family, Taboo is an outstanding work of fiction. Scott has created a cast of enigmatic, impossible-to-label characters, who slip between heroism and viciousness, the present and the past, while attempting to reconcile with their painful histories. As an act of the imagination, the novel is heartbreaking, lyrical and momentous. Writing from a Noongar community which has recently negotiated a settlement with the West Australian state, Scott has not only produced a literary triumph; he has also penned Australia’s first post-treaty novel.’

Get your copy of Taboo here 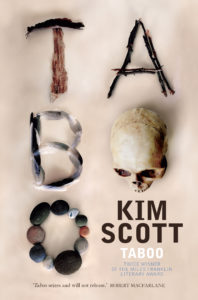 From Kim Scott comes a work charged with ambition and poetry, in equal parts brutal, mysterious and idealistic, about a young woman cast into a drama that has been playing for over two hundred years …Taboo takes place in the present day, in the rural South-West of Western Australia, and tells the story of a group of Noongar people who revisit, for the first time in many decades, a taboo place: the site of a massacre that followed the assassination, by these Noongar’s descendants, of a white man who had stolen a black woman. They come at the invitation of Dan Horton, the elderly owner of the farm on which the massacres unfolded. He hopes that by hosting the group he will satisfy his wife’s dying wishes and cleanse some moral stain from the ground on which he and his family have lived for generations.

But the sins of the past will not be so easily expunged.

We walk with the ragtag group through this taboo country and note in them glimmers of re-connection with language, lore, country. We learn alongside them how countless generations of Noongar may have lived in ideal rapport with the land. This is a novel of survival and renewal, as much as destruction; and, ultimately, of hope as much as despair.