Andrew Pippos has won the 2021 Readings Prize for New Australian Fiction with his debut novel, Lucky’s. Andrew’s novel was chosen from a list of over 60 books and resonated with judges for being an outstanding and clever debut.

The judges had this to say about why they chose the book: 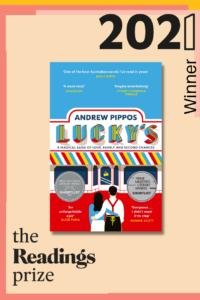 Lucky’s reminded us of a pre-covid, pre-hyperconnected time, one full of different challenges but still with much to say about our current moment where fortunes can flip quickly, and compassion is needed. There is a war just finished, a childhood changed forever by the actions of a parent, a shooting, an addiction, a new beginning or two. There is love, and loss, and a favourite television show we can all remember. There is humour and warmth in this story, as well as wisdom and madness. Pippos is never afraid to show a darker side to his characters; they can be unlikeable at times, but there is redemption too. He reminds us not to give up, to have hope, to trust. This is why we chose Lucky’s as our winner this year, because it is an outstanding, clever debut, one so many Australians can relate to, and enjoy.

Now in its eighth year, the Readings Prize for New Australian Fiction celebrates and supports the work of Australia’s emerging literary writers. Read more about the prize here.

This adds to the growing list of accolades for Lucky’s: 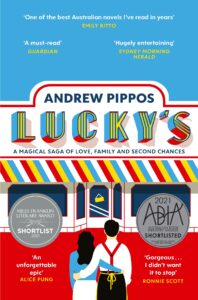 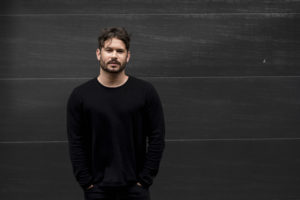 n planning for his debut novel, Lucky’s, Andrew Pippos did not need to look far for inspiration. This richly layered, sweeping saga documents the rise and fall of a family restaurant business over six decades.

Growing up, Andrew was a regular visitor to his family’s café in regional Australia. The Pippos’s Café De-Luxe operated in the remote New South Wales town of Brewarrina for more than eighty years. Andrew’s early experiences at the Café De-Luxe laid the foundation of his work as a writer. His relatives-who emigrated from the island of Ithaca, home of the hero Odysseus-would regale him with their favourite stories from Greek mythology, and over the years, his love of legends evolved into a love of literature, which led Andrew to tell stories of his own.

The compelling role of the Greek-Australian café within modern Australian identity is increasingly documented in popular culture and history books alike. While sadly few exist now, for much of the second half of the twentieth century these cafés could be found on urban shopping streets and in rural country towns. They represented a new Australian zeitgeist and symbolised every-day multiculturalism. The Greek-Australian cafe milieu gave Andrew his earliest sense of community.

Lucky’s is Andrew Pippos’s debut novel. A former journalist, Andrew has a doctorate in Creative Writing and tutors at the University of Technology, Sydney. He lives in Sydney’s inner west. Get your copy of Andrew Pippos’ incredible debut here.