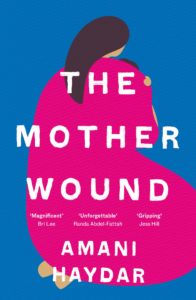 We are pleased to announce that The Mother Wound by Amani Haydar has been longlisted for the 2021 Walkley Book Award. The Walkley Book Award celebrates Australian writers who take enduring subjects from news, eyewitness accounts, investigations and history. Their books bring readers immersive detail, clear analysis and new revelations. This is the first nomination for The Mother Wound, with the winner of the award announced as part of the 66th Walkley Awards on February 11. Find out more about the Award here.

Amani Haydar is an artist, lawyer, mum and advocate for women’s health and safety based in Western Sydney. Amani’s writing and illustrations have been published in ABC News Online and SBS Life and her self-portrait Insert Headline Here was a finalist in the 2018 Archibald Prize. Amani uses visual art and writing to explore the personal and political dimensions of abuse, loss, identity and resilience.